FOREX TRADING: WHAT IS FOREX?

Forex trading is a term used to describe a group of people engaged in the active exchange of foreign currencies, most times for financial benefit or profit. Sometimes, they can be in the form of speculators looking to leverage the fluctuations in the price of currencies, or they can be a hedger protecting their accounts due to an adverse move against their currency positions.

The term ‘forex trader’ may describe an individual trader on a retail platform, a bank trader utilizing their institutional platform, or hedgers managing their own risk or outsourcing that function to a bank or money manager to manage the risk for them.

The foreign exchange market, otherwise known as forex (FX), is a decentralized marketplace where the buying and selling of different currencies occurs. This activity takes place over the counter (OTC) instead of on a centralized exchange.

Unknowingly, you may have participated in the foreign exchange market by importing goods such as cars, items of clothing or buying foreign currencies when you are on vacations or probably when you are schooling abroad.

Traders engage in trading for numerous reasons. Some of which include;

One interesting and unique aspect of the Forex Market is how the prices are quoted. These currencies are uniquely quoted by pairing them with other currencies. This price quotation may be confusing at first but becomes normalized over time when individuals work with this two-sided convention.

Forex trading in a pair offers the trader a bit of flexibility as it allows the trader the choice to pick their trade against the currency they feel most comfortable with.

Let’s take the British Pound, for example; let’s say a trader is highly optimistic about the performance of the British Economy and would like to get long the currency, but this investor is also bullish for the Canadian Economy and at the same time has bearish sentiments for the Japanese Economy. Given this example, the trader is expected to take a long position on the GBP/JPY.

This flexibility provides the investor with some bit of variety concerning having a wide range of currencies available in the market at every point in time to take advantage of, either going long or short depending on the traders’ sentiments or projections on the Economy’s performance.

FOREX TRADING: BASE VERSUS COUNTER CURRENCIES

One major distinction about a forex quote is the convention; The base currency of the pair is usually the first currency listed in the quote and this is the asset being quoted while the second currency in the pair is known as ‘counter’ currency.

The counter currency is the convention of the quote or simply put; the currency being used to determine the value of the first currency in the pair.

LET’S TAKE GBP/JPY AS AN EXAMPLE…

The Japanese Yen is the second currency in the quote, and this is the currency that the GBP/JPY quote is using to define the value of the Pounds.

In summary, the foreign exchange market works like many other markets in that it’s driven by supply and demand. for instance, if there is a strong demand for the British Pounds from Japanese citizens holding Yen, they will exchange their Yen for Pounds. 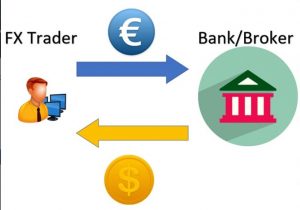 FOREX TRADING: WHAT DRIVES THE FLOW?

The above example is one of the factors that move the Forex market. Others include economic events like the election of a new president or country-specific factors such as the prevailing interest rate, GDP, unemployment, inflation and the debt to GDP ratio, Government debt, Trade-Weighted Index etc.

Top traders are updated about important economic decisions that can influence the market through economic calendars.

From a longer-term perspective, interest rates from the related economy are one major driver of Forex prices because they can directly influence holding a currency, either long or short.

WHAT EXPLAINS THE POPULARITY?

The foreign exchange market is very popular because it allows large institutions, governments, retail traders and private individuals to exchange one currency for another. The core of the FX market is the interbank market,, where liquidity providers trade amongst themselves.

A major feature of the Forex market is its availability to be traded round the clock all through the week (Monday-Friday) between global banks and liquidity providers.

As the trading session in Asia comes to a close, the European and UK banks come online before handing over to the US. The full trading day ends when the US session leads into the Asian session for the following day.

The availability of liquidity round the clock makes the Forex market very attractive to traders as they can easily enter and exit positions due to the numerous buyers and sellers in the FX market.

FOREX TRADING: HOW DOES IT WORK?

Trading in the Forex market is very similar to other markets: If a trader thinks the value of a currency will go up (appreciate), he or she can buy the currency. This phenomenon is known as “taking a long position”. (buy) If a trader feels the currency will go down (depreciate), you sell that currency. This phenomenon is known as going “short”. 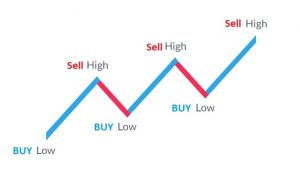 FOREX TRADING: WHO ARE THE MAJOR PLAYERS?

There are two major types of traders in the foreign exchange market: hedgers and speculators.

All traders need to have a good understanding of how to read a forex quote as this determines the price an individual enters or exits a trade.

For most FX markets, prices are offered up to five decimals but the first four are the most important. The number to the left of the decimal point indicates one unit of the counter currency, in this example, it is the USD and therefore is $1. The following two digits are the cents so in this case 13 US cents. The third and fourth digits represent fractions of a cent and are referred to as pips.

It’s key to note that the number in the fourth decimal place is known as a ‘pip’. Should the EUR depreciate against the USD by 100 pips, the new sell price will reflect the lower price of 1.12528 as it will cost less in USD to buy 1 Euro.

Another way of saying the above-quoted bid price is: The value of One Euro, in terms of US Dollars, is One Dollar, 13 cents, 52 pips and 8/10th’s of a pip.

Pip stands for ‘percentage in point,’ or “price interest point,”. It represents a tiny measure of the change in a currency pair in the forex market. A pip is a standardized unit and is the smallest amount by which a currency quote can change.

Pip cost or value is an extremely important data point for forex traders to be aware of, as this is how spreads are communicated; so it’s very important for traders to ‘know their pips.’

Trading can be a very daunting task, and it comes with a lot of risks. The risk that comes with financial loss is ever-present when it comes to trading on a live account. Losing a huge amount of money can be very expensive and discouraging for beginners who are just learning their ways in the journey of trading FX.

Several Forex brokers offer demo accounts for new or prospective traders to get acquainted with the dynamics before ever depositing their own money to trade in a live account.

Fictional capitals are made available by Forex brokers to new traders to implement their strategies while they implement their trades. A demo account can be a suitable platform to learn the dynamics of Forex trading, trigger positions, set stops, and scale-out of trades.

FOREX TRADING: FIVE REASONS WHY YOU SHOULD TRADE FOREX

Forex trading has many advantages over other markets as explained below:

It is important to have a disciplined approach and practice risk management when trading FX.

Martin Hellman and his contribution to Cryptography