Hackers can dare anything, really; almost everything. For example, Prime Minister of India Narendra Modi had his Twitter account hacked yesterday. The attackers took the opportunity to promote a Bitcoin (BTC) scam.

Those who took to the Indian Prime Minister’s Twitter account yesterday were surprised to learn two things. On the one hand, India has reportedly adopted Bitcoin as legal tender, and on the other, the government plans to distribute BTC to residents of the country: 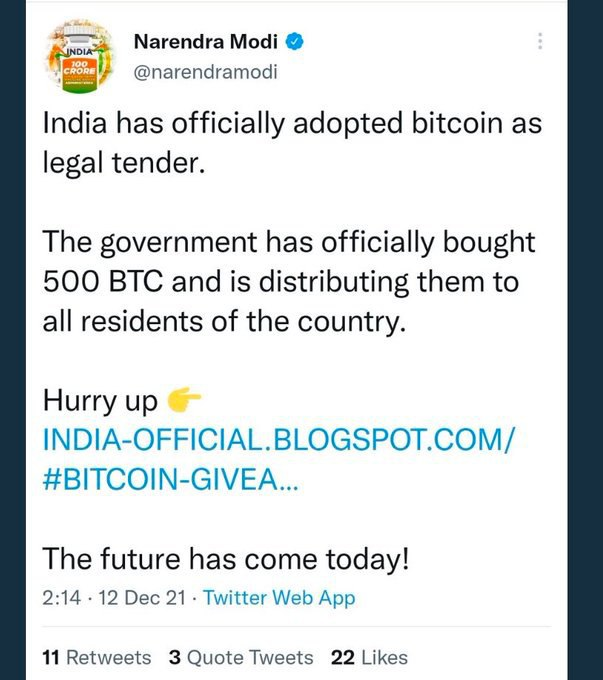 The tweet was fake. It builds on recent decisions by El Salvador, which this year adopted Bitcoin as legal tender and distributed $ 30 in BTC to its residents a few months ago.

The message was quickly deleted. It is not known if any people were victims of the scam. The ministry only said that the Twitter account had been “very briefly compromised,” and tweets shared in the meantime should be ignored.

No adoption of Bitcoin in India.

Would this be a habit for the Indian Prime Minister? In December 2020, his Twitter account had already been compromised. This time, the hackers invited users to send bitcoins, supposedly intended to help the country fight the Covid-19 crisis.

Prime Minister Modi’s Twitter account was hacked not once but twice by Bitcoin bhakts. In Dec 2020 & Dec 2021. pic.twitter.com/jwNk3ljnJN

We will, of course, remember that no head of state – not even the impulsive Nayib Bukele – would announce the adoption of Bitcoin without warning in advance and that we must therefore stay away from any declaration. Of this type, Specially since India has not been particularly tender with cryptocurrencies lately.

Forex vs Crypto trading: Everything you should know as a beginner

Forex vs Crypto trading: Everything you should know as a beginner